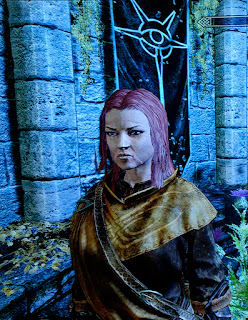 Apathea chills out in the Archmage's quarters. Before anything else, she completed the quests at the College of Winterhold. She has a scar on her cheek and otherwise I used photos of Neko Case for reference to help build the two-dimensional Apathea into a photo-realistic face. 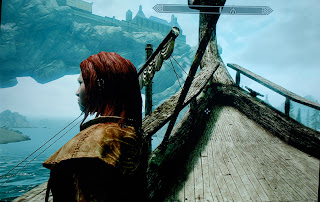 "I should have killed him."
A moment of reflection. Selke is assuredly just off-screen :) I picked up a copy of Americus from my friendly local public library to refresh my memory. This shot is meant to be a pretty close recreation of a panel from the last Apathea scene (except with Solitude looming in the distance). 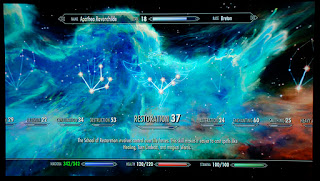 I only had time to get her up to level 18. I picked Breton for the magic-resistance. Most of her perks are in Destruction and Restoration magic since the book shows her setting dudes on fire and using a ward-like spell to shield herself from a dragon attack. Also I took a couple in One-Handed for the sword she carries and Enchanting (just because).

Right now she is equipped with a few staffs and an enchanted sword. She's decked out in gear to boost her Magicka and by this point is a force to be reckoned with. I'd been playing a strictly physical fighter until now, so it was a lot of fun to start over and go magic-heavy! Thanks for the inspiration, Jonathan and MK!